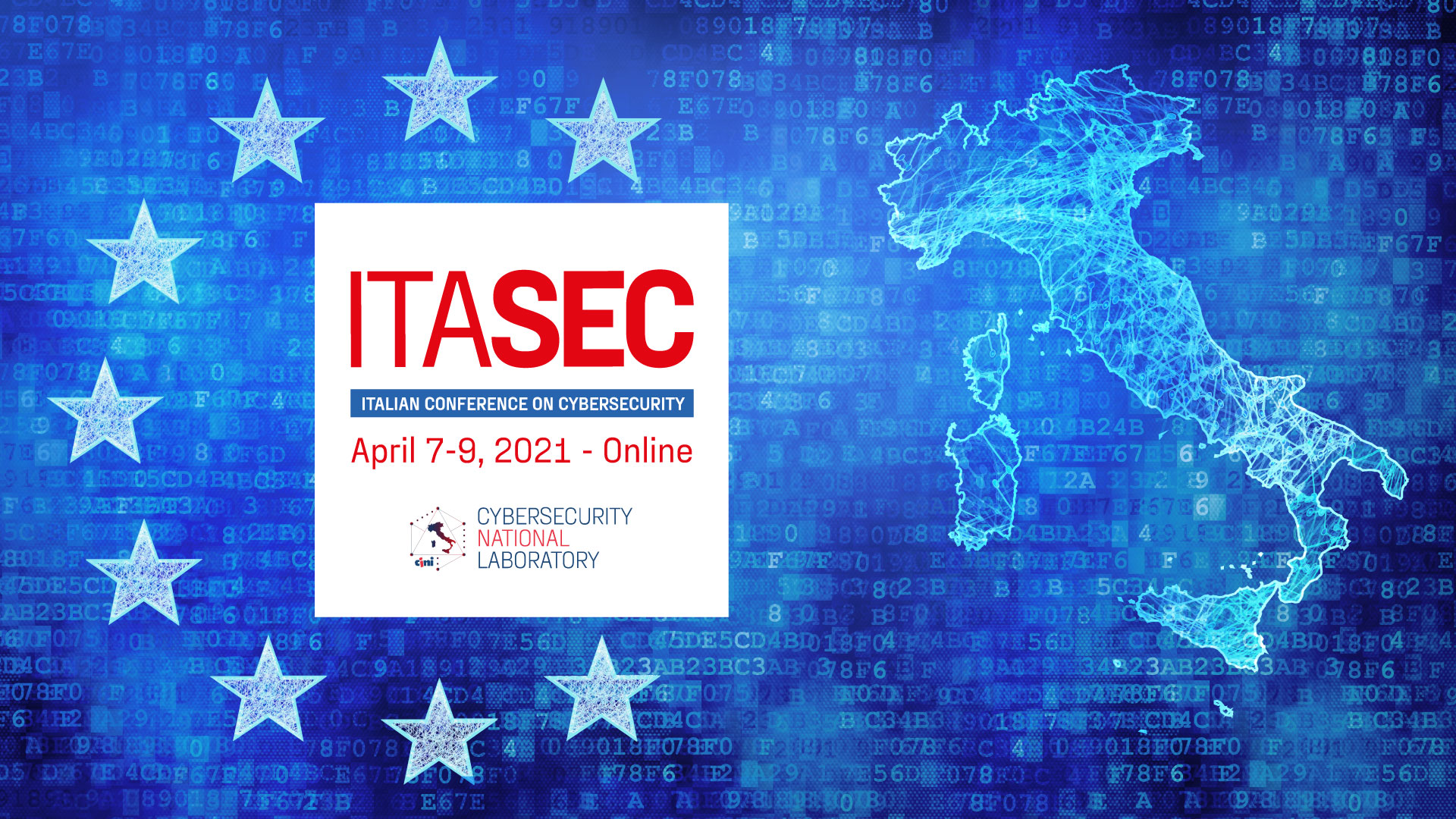 More than 1800 participants, 52 sessions and 4 separate tracks confirmed the importance of Itasec, Italy’s leading IT security conference, which was held for the first time this year entirely online due to health restrictions. The pandemic has not affected the spirit of the event, now in its fifth edition, which has gathered – virtually – guests and content of high scientific, technical, socio-political value, encouraging the sharing of knowledge and experience in the field of information security, increasingly central in everyone’s daily lives.

After the successful 2020 edition, which brought more than eight hundred people to Ancona, Itasec21 doubles the number of registered spectators and adds to this the hundreds of people who followed live streaming of dozens of hours of conferences and debates, with an overall attendance of more than three thousand spectators. On the four stages, workshops, stakeholder space, scientific & technical sessions and vendor sessions, 9, 17, 14 and 12 meetings were held respectively, which ensured an average attendance of 80 people per panel.

“A success that repays us for every effort and shows how the theme of information security is increasingly central and relevant for technicians, academics, companies and even just people interested in the subject, from whom we received thanks and positive feedback” – said Paolo Prinetto, director of the National Cybersecurity Laboratory of CINI -. Among the topics that usually find space in the halls of Itasec21, always focused on the future and innovation, this year there was also a search for answers to security in our daily lives, as a result of a particularly trying year also from the digital point of view. We believe we have suggested and inspired our guests and the audience, and we are convinced that more and more people will become involved in the fascination of the Net and its protection. Naturally, we hope to be able to resume this discussion, this time in presence, at Itasec22″.

The works opened with an introduction by Paolo Prinetto, director of the National Cybersecurity Laboratory of CINI (National Interuniversity Consortium for Informatics), and the Itasec21 co-chairs, Michele Colajanni, Alessandro Armando and Rocco De Nicola. This will be followed by the eagerly awaited keynote speech by this day’s guest of honour, the Director General of DG CONNECT (Directorate-General for Communication Networks, Contents and Technologies) at the European Commission, Roberto Viola. Former Chairman of the European Radio Spectrum Policy group (RSPG) and Secretary General of AGCOM, Viola presented an overview of the efforts made at European level to support the growth of the sector, with a particular focus on the political and regulatory role that is essential to increase the resilience of EU infrastructure. As Viola pointed out, digital development is an indispensable asset in strengthening a solid European system, which requires strong support at political, regulatory and cybersecurity level, protecting the interests and investments of the entire European Community.

The last of the valuable speeches of the review saw the participation of Prof. Roberto Baldoni, Deputy Director General of the Department of Information for Security (DIS), who offered an overview of the technical and legislative measures adopted in recent years to strengthen the resilience of the ‘Country System’. Just at Itasec, in Pisa in 2019, Baldoni had presented the first steps of a path that has been taking place over time and that, after two years, records the concrete start of the National Cyber Security Perimeter, which, with its implementing decrees, reorganises the logic of security in Italy in favour of a better manageability of domestic and international threats. Baldoni also praised the initiatives of the National Cybersecurity Laboratory, CyberChallenge.IT and Olicyber, which, by involving students from the first year of secondary school, guarantee a unique path of excellence to the world of cybersecurity: “A feather in the cap that contributes to making Italy relevant at international level,” said Baldoni.

Among the most prestigious guests at the event, opening the main stage on the final day, was the Deputy Prosecutor of the National Anti-Mafia and Anti-Terrorism Directorate, Giovanni Russo, with a presentation on the technological tools that enable the daily fight against terrorism and illegal activities. But security and the different nuances it can take on were the leitmotif of the event, which ranged from 5G to the protection of infrastructures in orbit, to provide the broadest overview of scenarios in which industry and research will move in the coming years.

The keynote speech by Luciano Floridi, professor of Sociology of Communication at the University of Bologna, who recently returned to Italy after a long teaching career at Oxford University, dealt with the problem of risk assessment and management in the “hyper history” in which we live. The analysis focused on the practical aspects of converting risks into costs and the role of the insurance industry in this scenario.

Nunzia Ciardi, Senior Director of the Polizia di Stato and Director of the Servizio Polizia Postale e delle Comunicazioni, gave an overview of how the Covid-19 pandemic has affected cyber threats in Italy, describing its evolution over the last year. This unique perspective helps to understand how cybercrimes evolve and what the best measures are to prevent them.

On the same day, the Scientific track keynote given by Lujo Bauer, Professor of Computer Science and Computer Engineering at Carnegie Mellon University (Pittsburgh, Pennsylvania), on the impact of attacks on Machine Learning algorithms and the dynamics that will change the way we understand digital protection and the methods of attack themselves in the coming years, was a great success.

Finally, CINI’s Innovation Hub (IH) organised a meeting on the commercialisation of research and on support, promotion and access to funding initiatives for start-ups, spin-offs and SMEs interested in becoming part of the national and European cybersecurity ecosystem. The two sessions, coordinated by Luigi Martino and Giulio Busulini, focused on access to industry, analysing technological needs and desires, and on the more financial aspects of cyber innovation, involving some national stakeholders interested in supporting innovative cyber projects and companies.

There were even more events, introduced by moderators Alessia Valentini (Cybersecurity 360), Sonia Montegiove (Il Messaggero) and Luca Zorloni (Wired), that enriched the days of Itasec. From tools for the protection of public safety to CyberReadiness.IT, a project of the National Cybersecurity Laboratory, which aims to provide useful methodologies and tools to measure the impact of the human factor in the assessment of an organisation’s cyber risks.

But Itasec21 is first and foremost a stage for the future: this is represented by the presentation of TeamItaly, the Italian national team of ethical hackers. In the presence of the captain, Andrea Biondo, and coach Mario Polino (who also gave a presentation on industrial plant security), the Itasec audience got an overview of the progress made, despite the pandemic, in perfecting the attack and defence techniques of the TeamItaly athletes. TeamItaly, ranked second in the European Cybersecurity challenge, is unique in Europe, with a team that is active all year round, using retreats and advanced training courses to train and strengthen the sense of ‘team’, even remotely in the event of a pandemic.

The challenge taken up by TeamItaly, CyberChallenge.IT and the cybersecurity Olympics, Olicyber, cannot be separated from a special focus on inclusiveness and the removal of gender barriers in the sector, which is the theme and mission of the National Cybersecurity Laboratory and the priority of its dedicated working group, CyberEquality, which presented a panel on the subject. Leading this just and heartfelt battle – for equal access to STEM subjects – was Professor Dajana Cassioli, Professor of Telecommunications Engineering at the University of L’Aquila, who, together with the other participants, promoted a reflection on the reasons that could most discourage women from embarking on a professional career in the IT and security sector.

Itasec21 has also grown in terms of communication, a fundamental tool for expanding knowledge in the field of computer security and for stimulating the broadest interest in scientific subjects in general, for the benefit of experts and the public as a whole. Thus the conference saw an overall increase in press releases and the creation of a special evening newsletter, Triplesec, which reported on the days of the conference, temporarily replacing the ritual evening meeting with journalists at aperitif time. In addition, there was a course aimed directly at journalists, valid for professional credits, organised in collaboration with the Ordine dei giornalisti dell’Umbria, Wired and the Hermes Centre for Transparency and Digital Human Rights. The initiative made it possible to analyse the methods of communication of data breaches and the most correct way to deal with them, both from the point of view of the reporter and that of the press office of companies that may have fallen victim to a cyber attack. More concretely, the meeting also provided useful elements to improve the protection of sources and telecommunications. The entire initiative was accompanied by the constant reporting of Itasec’s media partners, La Stampa, Wired, Report Difesa and Cybersecurity Italia, confirming the growing commitment of the press to information security issues.

Demonstrating the growing importance of Itasec is also an increase in the number of sponsor companies, necessary for the success of the conference and fundamental in offering the point of view of those who work every day in the field of information security, responding to the needs of institutions and companies. This was the opportunity offered by the Platinum sponsors (Accenture, aizoOn, Blu5 group, Bv Tech, Cisco, Exabeam, Exprivia, Leonardo, Microsoft Italia and Minsait), who, together with the Gold and Silver sponsors (7Layers, Huawei and Tiesse as Gold, Cybertech and Hermes bay as Silver) supported the initiative.