TeamItaly, the Italian national hacking team for the 2022 European Championships in Vienna 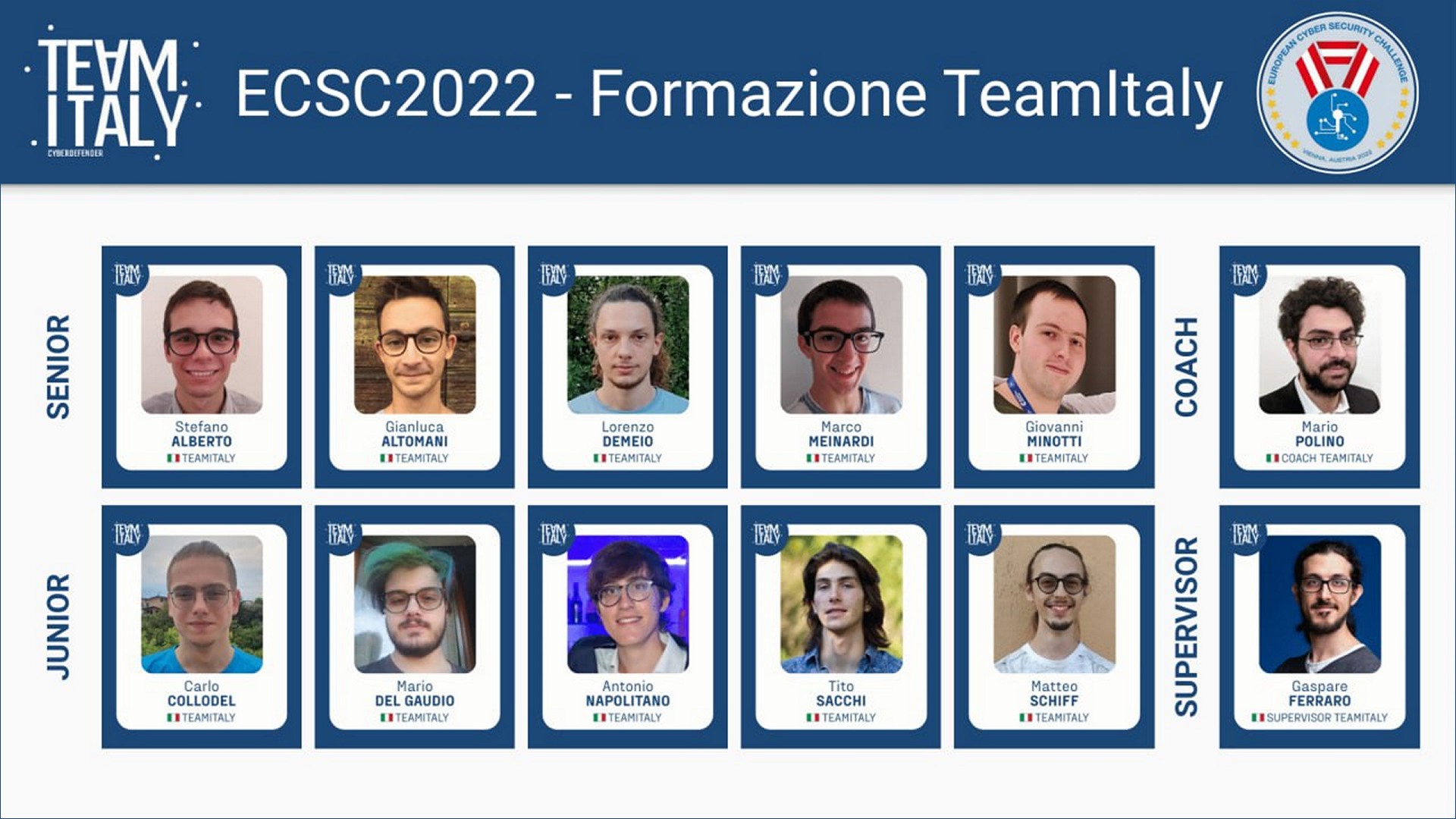 05 Sep TeamItaly, the Italian national hacking team for the 2022 European Championships in Vienna

Posted at 10:30h in Home Gallery, News by Alessio Ruta

The invitations have arrived for the Cyberdefender National Team, TeamItaly, which will leave for Vienna on 11 September to compete in the European Cybersecurity Challenge, Europe‘s leading competition for cybersecurity experts.

The team, made up entirely of young people between the ages of 16 and 24, has for years been a regular presence on the podium of international events, where it has demonstrated excellence in both the fields of attack and cyber defence, which characterise this type of competition.

The new shortlist, which includes old presences and new ‘athletes’, is made up of the best minds that have taken part in CyberChallenge.IT, the advanced training course in the field of cybersecurity curated and implemented by the National Cybersecurity Laboratory of the CINI (National Interuniversity Consortium for Informatics). Just a few months ago, on 30 June, the CyberChallenge.IT final was held, in which 204 young people from 34 Italian universities and institutes participated.

Under the guidance of coach Mario Polino and the supervision of team coordinator Gaspare Ferraro, the team will consist of Stefano Alberto, Gianluca Altomani, Lorenzo Demeio, Marco Meinardi and Giovanni Minotti for the seniors; the new recruits are Carlo Collodel, Mario Del Gaudio, Antonio Napolitano, Tito Sacchi and Matteo Schiff.

TeamItaly in its new formation will officially meet on 4 September in Turin, for the first training camp. Here the national team will have the opportunity to fine-tune its strategies in view of the approaching competition. On Friday 9 September at 2.30 p.m. the new squad will instead be presented to the public at a press conference – also broadcast online – in the halls of the ITC ILO in Turin, which has been hosting the team’s activities for years.

Over the years, TeamItaly, thanks to its highly specialised training, has been one of the main protagonists of the Capture the flag (Ctf, a kind of digital flag-stealing) competitions in which each team has to discover the digital vulnerabilities of the adversary’s infrastructure while defending its own. This is a well-known playing field for the Italian team, which, thanks to the CINI and the sponsors supporting it – aizoOn, BV TECH Group, Cisco, Cybertech, Eni, Telsy and WhiteJar.io – has garnered praise from industry experts, even being recognised by the Prime Minister’s Office during a meeting at Palazzo Chigi with Prime Minister Mario Draghi.

“An opportunity that also testifies to the importance of the skills cultivated by young athletes in the scenario of the digitised world, where more and more companies, private individuals and public administrations depend on the digital avant-garde to achieve their goals,” said Paolo Prinetto, director of the National Cybersecurity Laboratory: “In this sense also goes the annual organisation of a team retreat, which is aligned with the national strategies on cybersecurity, promoting cyber skills as an asset for the country system and supporting young experts in a training path of excellence, unique in Europe, with the prospect of a better defensive capacity for companies and institutions.”